ALL BOOKS
ALL BOOKS

The US Senate and the Commonwealth: Kentucky Lawmakers and the Evolution of Legislative Leadership

Kentucky has long punched above its weight in the US Senate, as some of the nation’s most distinguished senators have hailed from the Commonwealth. Despite its relatively small population for much of American history, Kentucky has produced a record two Senate majority leaders, a record three Senate majority whips, and one of the country’s greatest lawmakers, Henry Clay. These Kentuckians played an important role in the evolution of leadership institutions in the Senate. Official positions such as Senate majority leader and majority whip are nowhere to be found in the Constitution or early American history, yet today these offices have essentially eclipsed the constitutionally created legislative leadership positions of vice president and president pro tempore. While Kentucky senators have played a vital role in leading the Senate and in its institutional history, no book has told the story in its entirety.

The US Senate and the Commonwealth is the first book of its kind to provide a detailed, yet accessible, discussion of the US Senate’s leadership throughout its 225-year history. Senator Mitch McConnell and Roy E. Brownell II weave together the history of the Senate with lively portraits of prominent Kentucky senators as well as firsthand reflections about legislative leadership by a Senate majority leader. The authors illuminate and humanize this discussion by exploring the colorful and vivid lives of fifteen Kentucky lawmakers, including Henry Clay, Alben Barkley, and John Sherman Cooper. This compelling and fascinating study is an essential resource.

“This is a prizeworthy book. It sets forth a compelling case for the Commonwealth of Kentucky’s unique and outsized contribution, through the exertions of fifteen of its sixty-six US senators, to the 225-year evolution of leadership in the United States Senate. I know of no better summary of a single state’s contribution to the US Senate and American public policy making than the one offered in this volume. It is an operator’s manual for current US senators―from befuddled freshmen to savvy seniors. And it is an eye-opener for any citizen, anywhere, curious about the evolution of America’s representative democracy and concerned about its power to endure.”―Richard A. Baker, US Senate Historian Emeritus and coauthor of The American Senate: An Insider’s History

“This volume skillfully blends keen historical analysis with the senator’s own commentary. It is a fascinating reminder of the pivotal role Kentuckians have played in the evolution of the United States Senate over the last two centuries. Specialists and lay readers alike will savor the insights and master storytelling that appear here.”―Thomas H. Appleton Jr., Eastern Kentucky University

“The names of Henry Clay, Alben Barkley, John Sherman Cooper, and Wendell Ford may be familiar to many Kentuckians for their political roles, but less so in regard to the evolution of leadership in Congress. And what about mostly forgotten figures such as John Brown, John Pope, James B. Beck, or J.C.S. Blackburn? A strength of this work is that it brings alive all these significant players in the political past of the state and reminds us again of the importance of Kentucky in national affairs. But this work is more than that, for it also includes the commentary by a US Senate Majority Leader on that body. Taken together, all that makes this book both an interesting read and an important look at politics, past and present.”―James C. Klotter, the State Historian of Kentucky and coauthor of The New History of Kentucky

“The Commonwealth of Kentucky has produced more than its share of Thoroughbreds and Senate leaders. From their unique perspectives, Senator Mitch McConnell and Roy Brownell recount a diversity of leadership and evaluate individual effectiveness. These profiles reveal much about how the United States Senate has operated throughout its history.”―Donald A. Ritchie, Historian Emeritus of the US Senate

“A remarkable achievement. This is the most important historical work written in collaboration with a Senate leader. Senator Mitch McConnell and Reb Brownell have written a well-researched, well-crafted set of essays on the political lives of the most important Kentucky senators. Each essay includes original contributions to our understanding of important developments in the Senate. Every scholar of congressional history, every senator, and every Kentuckian will learn from the richly documented essays of this book.”―Steven S. Smith, Washington University

“The US Senate and the Commonwealth is an outstanding study of Senate leadership. Through a series of biographies, Senator McConnell and Mr. Brownell sketch vivid portraits of Kentucky senators who have stood in the front ranks of the institution―including Henry Clay (the great 19th-century statesman), Alben Barkley (the Senate’s Democratic leader from 1937 to 1949), and Wendell Ford (the Democratic whip in the 1990s). Given the prominence of Kentuckians in the annals of the Senate, this book provides a window into the broader history of the institution. It is a fascinating read, grounded in an impressive command of the literature, a deep knowledge of original sources, and lively firsthand accounts of Congress in action. It is an essential source for anyone interested in the US Senate, its development, and its parties and leaders.”―Gerald Gamm, University of Rochester 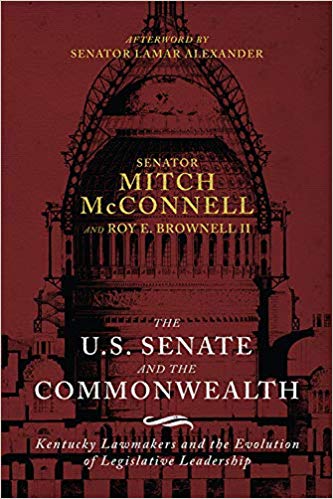